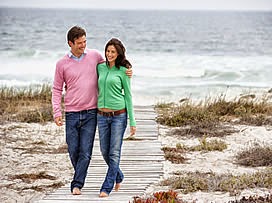 1. He’s good with his mom (and other female members of his family.)
Being respectful to his mother is a huge indicator of how a guy treats other women — after all, she’s the first woman he ever had to act any which way around — and so if he manages to get along well with his family, it speaks well of how he’s been taught to treat any woman who comes after them. He doesn’t have to fawn over them and call them every single day, but sending his niece birthday presents, getting along well with his sister, and being nervous about introducing you to his mom (because he wants her to like you) are always signs that he knows how to care about someone, and further, how to express those emotions.


2. He dresses well.
If the media has taught us anything, it is that women can overlook a man’s sins if he. can. dress — i.e.: Don Draper, Lord Disick, Patrick Bateman(?) — but on a much less hyperbolic example, it’s
always nice when a guy puts a little effort into looking like he thought about what he’s wearing. (Which is not to say that sweats don’t have their place, because sometimes you just gotta be comfy.) And you don’t even have to look NBA press-conference fly to dress well; clean jeans and t-shirts will always look good. Whatever your personal style, if it looks like you take pride in that natural extension of yourself, then we’re going to appreciate it.
3. He has hobbies.
Whether that is a pick-up game of basketball every week with his friends or he likes to pore through the second-hand bookstore, he’s got to have something to call distinctly his own. A guy whose whole life is going to work, then to the bar with his buddies, then home is a guy who is going to only let you work your way into that little world rather than opening up his life (and himself) to you.
4. He makes plans.
Actual plans. Actual, real, let’s-do-this-thing-at-this-time-and-place plans. I know it looks like you’re playing it cool to just leave things up to chance and see how the night progresses, but taking the initiative and saying, hey, I want to see you, is a surefire way to get the butterflies jumping around in our stomachs.
5. He has a sense of humor — and not at the expense of other people.
We all say ridiculous things from time to time, and if a guy can sit there and gamely laugh at whatever inane thing comes out of your mouth, it’s nice (especially when we still — after all these years — seem to be in the throes of some weird “women shouldn’t try to be funny” debate.) Plus, if his sense of humor isn’t based on constantly putting other people down, it’s nice that he notices the comical bits about life without tearing down other people in order to put himself on top.
6. He’s not automatically a “yes man”.
This relates back to his having his own hobbies and making plans, but if he can manage to do something on his own without his posse coming along for the ride, it speaks really highly of him. Hearing him say, “Nah, man, I’m gonna spend the night with my girl” rather than joining the crowd at the bar is a selfish little happiness on our parts, to be sure, but being able to make up his own mind about what he wants to do — and then actually doing it — are signs of a person who just knows who he is, and that’s sexy.
7. He’s the same way around his friends as he is around you.
This is a great way to know that you’re getting the genuine person – no fronts, no acts, just them. If he’s puffing and preening around you, his buddies are sure to tell him to knock it off. If he invites you in, however, and welcomes you to hang with them with zero pretenses, not only have you passed a major barrier, but you can also feel good about the fact that you’ve seen exactly who he is, no smoke or mirrors involved.
8. He listens.
I’ve had so many guy friends justify why men seem to find listening so difficult — “Because we want to do something about it!” “We want to fix the problem!” “We want to take action!” But like, bro. Chill. I know just sitting there and listening feels like the ultimate awkward wtf-am-I-supposed-to-do-with-my-hands hug, but just have the awkward-fish-arms-hug. Just nod along. Let us get it out. Say “that sucks” every now and again. Providing us with the solution at every turn just makes us feel like we’re even more in struggle city than we already feel like we are.
9. He expresses himself in little ways.


Whether he sends you a random email to say “hi” or a YouTube video he thinks you might like, picks up a bottle of wine to have with dinner just because, or even if you just wake up in the middle of the night only to realize that his hand found yours in his sleep, seeing those little fleeting bits of affection are always enough to warm even the most unsure heart and assure us that yeah, he cares
at 1:18 AM
Email ThisBlogThis!Share to TwitterShare to FacebookShare to Pinterest
Labels: Relationship