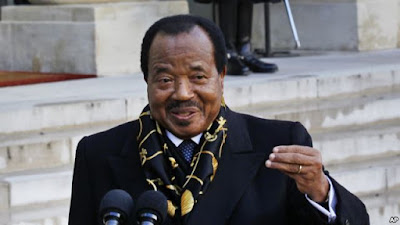 Celebrations were held across Cameroon on Friday, commemorating President Paul Biya's 33 years in power.  Opposition parties are calling on Biya to consider stepping down when his current term ends in 2018.  But there are no signs the 82-year-old president will.

Professor Jacques Fame Ndonga, a front line supporter of the octogenarian, says Biya's backers have a moral responsibility to celebrate their leader's successes, especially for the internal peace Cameroon enjoys.
He says as they celebrate, they remember thousands who have either died or are suffering from the Boko Haram insurgency, which he says could have been terrible had Biya not declared war against the terrorists in the north of the country.

He says people should join him in counting the blessings they have enjoyed from Biya's leadership. "It suffices to look all over the national territory and people will see the achievements of Biya.  Schools, universities, health centers and hospitals, rural and urban electrification projects and drinkable water plans are some of the successes.  Biya promotes development all over Cameroon without any favoritism and that the Cameroonian leader assures territorial integrity, and rights and freedom for everyone," said Ndonga.

voanews.com
at 12:00 AM
Email ThisBlogThis!Share to TwitterShare to FacebookShare to Pinterest
Labels: News